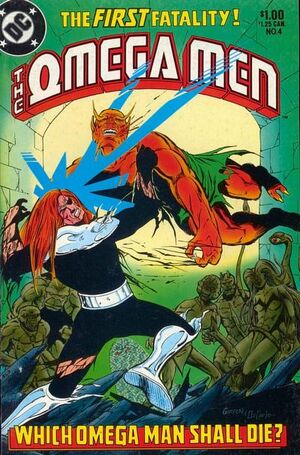 For all your planning, nothing ever pans out. We sit around cooling our heels and every second, people are murdered in droves!

The Greeshagurt merges completely with Kalista, possessing her in both body and mind. She stands atop the planetary force shield surrounding her home world of Euphorix. Two guards on a hover-skiff take notice of her and temporarily deactivate the field, allowing her to fall through. The creature separates from Kalista and attacks one of the men, allowing Kalista's unconscious body to plummet towards the ground. The other guard swoops down and rescues her. The Greeshagurt falls to the ground and dies on impact. The Citadel warship attempts to descend towards the planet, but the Euphorians raise the shield again and the ship batters onto the surface.

On Slagg, Demonia has a conversation with the cat-woman Felicity. Felicity is upset because Tigorr has been practically ignoring her since his return from Changralyn. Demonia mentions that his mind is heavy with the ongoing competition between Primus and he. Demonia subtly continues to manipulate Felicity's emotions. Tigorr meanwhile, shares drinks with some of the other refugees. The others begin to distrust Primus, and they speak of rumors that he may be using his psionic powers to mind control them. Several aliens are ready to side with Tigorr should he decide to wrest control from Primus. Primus finally enters the dining hall and Tigorr and he get into an argument. Neither man is willing to listen to the other and they decide that the only way to determine who should lead the Omega Men is through trial by combat. The fight is vicious and Tigorr plows into Primus with total savagery. Primus is an able-bodied warrior in his own right, and his skills are supplemented by his mental powers.

As the two continue to wear away at one another, Demonia sends a recording of their fight to the Citadel. She offers her comrades up to the conquerors and tells him that they are now headquartered on Slagg. Tigorr swipes away at Primus, but as the crowd cheers him on, he realizes that something is wrong. He knows somehow that they have been manipulated. As Primus' near-unconscious form is dragged away, Tigorr skulks off to Demonia's room. He catches her in the midst of broadcasting their location to the Citadel. The two fight one another and Tigorr is victorious. He then sends his own signal to the Citadel, telling them that they will never back down and that they are taking the fight to them.

Retrieved from "https://heykidscomics.fandom.com/wiki/Omega_Men_Vol_1_4?oldid=1455454"
Community content is available under CC-BY-SA unless otherwise noted.