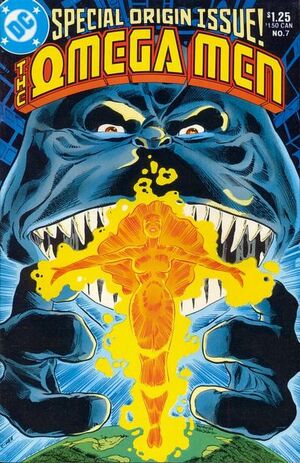 We freed the whole stinkin' solar system. Nobody can say that was wrong! Ya do what ya have to do ta get the job done!

Appearing in "The Way It Began..."Edit

Synopsis for "The Way It Began..."Edit

Auron's light shield saves Tigorr and another Omega Man from the explosion that destroys the Citadel nerve complex. The sentient computer system Complex-Complex is still active however. It taunts Tigorr and tells him that by destroying the tether that kept the Citadel forces bound to it, he has actually aided the machine entity in its objective to spread violence and war across the galaxy. Complex-Complex gives the three men a history lesson detailing the origins of the Citadel. He tells them of X'Hal of Okaara, who was taken by the Psions and forced to crossbreed with one of the Warriors of Branx. X'Hal's forced union produced two offspring: Auron and the Citadelian progenitor - the being who is now known as Complex-Complex. They also learn that it was the forced removal of the Branx Warrior's soul that produced the wraith-like entity known as Nimbus. These actions gave rise to the creation of the Citadel Empire and turned the peaceful denizens of Okaara into a society of battle-hardened warlords. Auron, disgusted by Complex-Complex's tale flies off. Despite Complex-Complex's words however, Tigorr still stands by his actions.

Retrieved from "https://heykidscomics.fandom.com/wiki/Omega_Men_Vol_1_7?oldid=1455457"
Community content is available under CC-BY-SA unless otherwise noted.