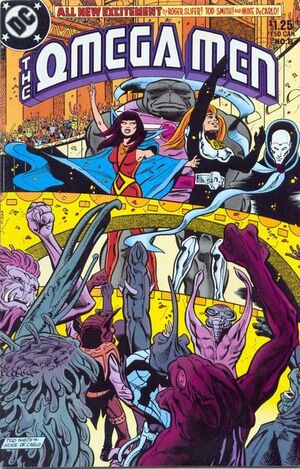 This is very undignified for a man of my years!

Across the Vega star system, hundreds of aliens rejoice for the ongoing war with the Citadel has finally ended. Families are reunited and those who have spent their lives enslaved to the Citadel are finally freed. Even on the barren wasteland of Slagg, the Omega Men take time for a brief respite. Felicity even attempts to teach Doc how to dance. The Euphorian Rhoark tells Primus that Kalista is back on their homeworld and Primus decides that it is high time to return to the world of his birth to wrest the crown from its reigning leader Alonzo Dulak.

On Euphorix, King Dulak takes Kalista on a tour of the royal city. He appears to be as joyous to see her return and Kalista is overwhelmed by the news that the war has ended. While walking the gardens, Dulak witnesses two tourists littering the grounds. Kalista prevents him from flying into a rage, but then he secretly tells one of his guards to dispel the "garbage". Understanding Dulak's veiled command, the guard promptly disintegrates both the litter and the tourists responsible for leaving it.

On the Citadel Homeworld, the advance team of Omega Men take time to engage in some revelry. Though there are various alcoholic beverages to choose from, the gruff Tigorr prefers a bottle of cold milk. Tigorr's compatriots know better than to question their leader's desired tastes.

Elsewhere, another group of newly freed refugees decide to enjoy their newfound freedom through acts of vengeance. They pursue a Gordanian slave ship through an asteroid cluster and disable it. The ship crash lands on a meteoroid and the rebels apprehend the Gordanian slavers. The occupants of the ship's dungeons include the Omega Men known as Broot and Nimbus.

On Euphorix, Dulak and Kalista return to the royal palace for a lavish feast. Dulak reminds Kalista that, as per their agreement, now that the war is over, Kalista reserves the right to resume her role as queen of Euphorix. It is Dulak's hope that Kalista might choose him to serve as her royal concert, but she quickly makes it clear that such a role is reserved solely for her husband Primus.

On the Citadel Homeworld, the Supreme commander of the Citadelian forces and Harry Hokum arrive to survey the wreckage of the central command center. Harry cannot understand how such an intellectually stunted species such as the Citadel could ever have amassed such advanced technology.

Before long, Primus meets up with Broot and Nimbus and together they travel to Euphorix to reunite with Kalista. They attend her official coronation as queen of Euphorix.

Retrieved from "https://heykidscomics.fandom.com/wiki/Omega_Men_Vol_1_8?oldid=1533032"
Community content is available under CC-BY-SA unless otherwise noted.