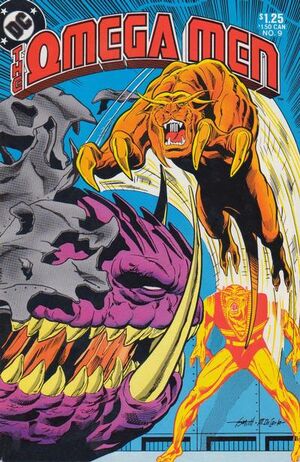 The Vegan system has been at war too long! Now is the time for peace!

Appearing in "Hail, Kalista... Once and Future Queen!"Edit

Synopsis for "Hail, Kalista... Once and Future Queen!"Edit

Kalista attends the royal coronation ceremony at the royal palace and resumes the role of queen of Euphorix. Her first official act as the reinstated queen is the deactivation of Euphorix's planetary shield. A huge celebration is held and hundreds of attendees rejoice at their newfound freedom from tyranny.

Elsewhere, fringe elements of the Citadel Empire regroup under the leadership of the Citadel's supreme military commander and the Earth man Harry Hokum. Together they travel to formerly occupied worlds executing political prisoners. They also succeed in locating the crippled Omega Men mothership and find the injured Harpis. Shlagen however, also on the ship, manages to avoid capture in an escape pod. Hokum sends a ship to retrieve him, and Shalgen's shuttle is shot down where it crashes onto a planetoid. Shlagen emerges from the wreckage but runs into the bounty hunter Lobo. Lobo agrees to take Shlagen to Euphorix.

When the Citadel learns that Euphorix's planetary shield has been dissolved, they mount a steadfast invasion. Raider ships bombard the coronation ceremony and the attending Omega Men are quick to fight back. They succeed in repelling the invaders and former monarch Alonzo Dulak re-activates the shield. Primus transmits a broadcast to Harry Hokum requesting a summit in the hopes that the two factions might be able to forge an accord. Hokum agrees to the meeting.

Meanwhile, Tigorr, on his way back from the Citadel Homeworld finds the scuttled remains of the Omega Men mothership. Inspecting its empty corridors, he is surprised when two predatory animals known as Ravagers leap out and attack him. He shapeshifts into his full feline form and fights back, but the overwhelming strength of the Ravagers prove too much for him and he is knocked unconscious.

Elsewhere, Primus sends Nimbus to act as the Omega Men's official delegate. He arrives at the pre-arranged meeting place to discuss terms with Harry Hokum. Unfortunately for Nimbus, Hokum baits him into a trap and Nimubs is locked inside an airtight room. Even his shadow powers won't allow him to escape. When Primus learns what has happened, he has little choice but to turn to Lobo for help. Lobo agrees to help Primus, but for a very special price - a single human life.

Retrieved from "https://heykidscomics.fandom.com/wiki/Omega_Men_Vol_1_9?oldid=1533034"
Community content is available under CC-BY-SA unless otherwise noted.