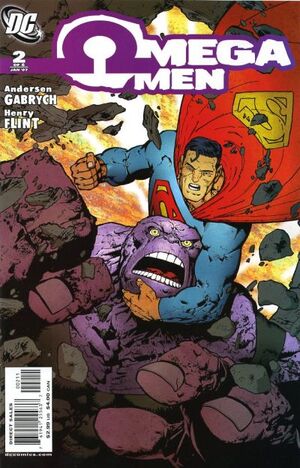 Pal, you should know by now, no matter what kinda muscle you bring in-- Omega Men don't surrender.

The Omega Men mix it up with Vril Dox and his cronies. Superman dukes it out with Broot and are just about to reach an understanding when Doc takes the Man of Steel out of the picture. Tigorr, while tackling Vril, explains that the Omega Men are hear to stop Lady Styx's cult from destroying the universe. Green Lantern takes the by-stander nun back home, and she tells him her story.

The Spider Guild returns home, content at obtaining the final Heartstone and sending it off to the "new host."

Lianna reveals to John how Mother Zed brought her to Earth to help protect the Heartstone from Lady Styx. Meanwhile, the captive Darkfire reveals to Wonder Girl how the "Darkstars" brought Lady Styx's religion to Vega, causing the "Stygian Slaughter," and how he found a Heartstone that gave him new powers. Suddenly, a Zeta-Beam transports the Omega Men back to their ship.

After what Superman, Wonder Girl, and Cyborg have learned, they ask Vril Dox to explain why they were trying to arrest the Omega Men. Back on the ship, Broot questions why they are doing what they are doing. Doc agrees. Just when the Omega Men are about to call it quits on this mission, the nun mysteriously appears.

Retrieved from "https://heykidscomics.fandom.com/wiki/Omega_Men_Vol_2_2?oldid=1565526"
Community content is available under CC-BY-SA unless otherwise noted.