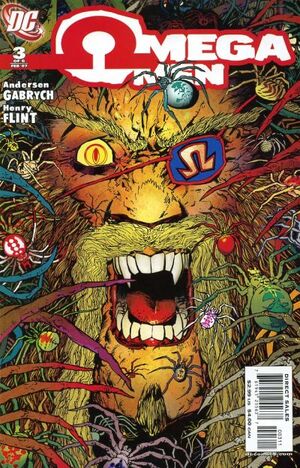 If God's everything, then isn't this God-killing bitch part of god, too?

Lianna briefs Tigorr on Lady Styx's plan: Bring the three Heartstone hosts together, along with the fourth Heartsstone. Kill God. Take his place. Elu thinks that Darkfire is secretly working for Lady Styx and a fight breaks out within the Omega Men.

On Earth, Superman argues with Vril Dox over whether Vril should stop his hunt for the Omega Men. Tigorr decides to split up the team - he and Broot to fight the Spider Guild Emperor, the rest to go after Earth's fourth Heartstone. Lianna objects, grabs Vril, and teleports away.

Vril visits the Spider Emperor to question him about the attack on Earth. The Spider Emperor responds by taking him captive for Lady Styx. The core group of Omega Men find the Spider-Ship that grabbed the fourth Heartstone. They move in to investigate and are immediately overwhelmed by a strange, pink, plasma-like life-form. Lianna and Tigorr start fighting their way to the Spider Emperor. They soon are face-to-face with a band of Darkstars consisting of old, dead friends, mostly former Omega Men, that seem to be in good shape...

Retrieved from "https://heykidscomics.fandom.com/wiki/Omega_Men_Vol_2_3?oldid=1565527"
Community content is available under CC-BY-SA unless otherwise noted.