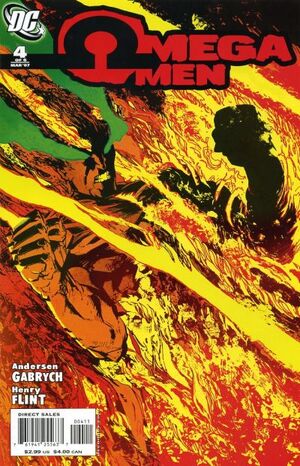 Believe me, sister, I don't trust anything that's been dead for years and still can smile, but... these guys were Omega Men.

Appearing in "A Creation Miss"Edit

Synopsis for "A Creation Miss"Edit

The resurrected Omega Men (now Darkstars) tell Tigorr that they are the real deal, resurrected by their lady's love. Tigorr runs off to find his wife. Lianna's Mother starts talking to Lianna, but she's not buying it. She blows her "mother" up and tells Tigorr to "hold on".

Meanwhile, Lady Styx continues to weave a web to trap Vril Dox. Darkfire, while the other Omega Men lay frozen, learns that Silica is the host of the fourth Heartstone.

Tigorr finds Felicity, who is held captive because she refused to be a "Darkstar slave" for Lady Styx. But Felicity says that she can't leave since she died and did not agree to become a Darkstar. Tigorr refuses to leave her. Lianna warns the Darkstars to give up, but they refuse and a blood-bath begins.

Finally, the four Heartstones all have hosts and they begin communicating with themselves. All they need now is "the force to unite our forces." Having dispatched the Darkstars, Lianna faces fellow Heartstone host, the Spider Emperor. Although he warns that Dox and Tigorr will be forever trapped in the darkness if she kills him, Lianna rips him apart.

Retrieved from "https://heykidscomics.fandom.com/wiki/Omega_Men_Vol_2_4?oldid=1565528"
Community content is available under CC-BY-SA unless otherwise noted.