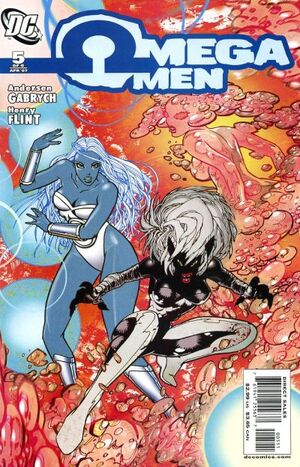 Hey Dox. Next time one of your computers comes to life with the power to destroy reality... Just tell the bitch you love her.

Lianna announces that the Spider Emperor is dead and it is time to rejoice! Darkfire is glad of the news, but needs his team to be revived - which Silica does post haste. The Omega Men need to rescue Tigorr. Meanwhile, Vril Dox remains trapped with Lady Styx.

Tigorr and Felicity wander the darkness looking for a way out. They start to hear singing, and then see a giant, green Heartstone - and it's being ripped out by Lianna's giant hand! It seems that Tigorr and Felicity are actually trapped inside the dead Spider Emperor. Tigorr is pulled out, but Felicity jumps towards the Hearstone. Soon, with a giant "shripp!," Felicity makes her way out and returns to the land of the living. In honor of an old friend, asks to be called "Nimbus".

On the Omega Men's ship, Doc has confirmed that by combining with the Heartstone, Dox's computer Silica is now alive. Silica creates a warp, reuniting the team with Tigorr. Unfortunately, this means that three of the four Heartstones are now in the same place. Silica immediately demands that Nimbus releases Dox, but Nimbus says she does not know how - her powers are different from how they were manifested in the Spider Emperor. Although it becomes awkwardly clear that Silica is in love with Vril Dox...

A fight between Nimbus, Felicity, and Silica breaks out, and eventually Commander Dox is brought forth (and Silica professes her love). Dox tells Silica that he could never love her. A song overheard by Silica about loving Lady Styx causes her to overturn her rejection and find comfort within the love of Lady Styx! Tigorr states it best: "This can't be good."

Lady Styx now appears and empowers herself by combining all four Heartstone hosts.

Retrieved from "https://heykidscomics.fandom.com/wiki/Omega_Men_Vol_2_5?oldid=1565523"
Community content is available under CC-BY-SA unless otherwise noted.