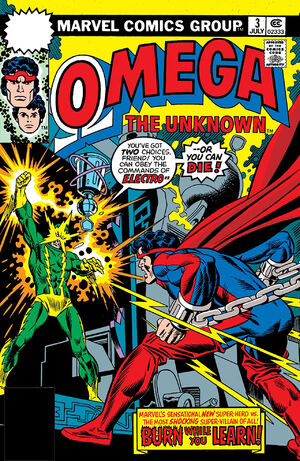 Appearing in "Burn While You Learn!"Edit

Synopsis for "Burn While You Learn!"Edit

While recovering in the hospital, James-Michael and Ruth see the Daily Bugle story featuring Amber's photos of the fight between the Hulk and the superhero the paper dubs "Omega". That morning, James-Michael is sent to attend public school for the first time. He meets his exasperated teachers and rowdy classmates, including a friendly girl named Dian, John the nerd, and Nick the bully.

Meanwhile, Electro holds Omega prisoner in a subway tunnel, demanding his help to repair the android he stole earlier. Omega lashes out and kicks the android over the edge onto the tracks, which has the unintended effect of reviving the android with the electricity from the third rail. Realizing how to power and control the android, Electro takes it with him to hijack a telethon for a crippled boy named Freddie, but Omega frees himself and chases after them. James-Michael and Amber tune into the telethon on TV just in time to see Omega defeat the android. Omega and Electro engage in a power struggle with their respective energy blasts, but the balance is broken when Freddie takes the chance to trip Electro with his crutch, allowing Omega to defeat the villain.

Retrieved from "https://heykidscomics.fandom.com/wiki/Omega_the_Unknown_Vol_1_3?oldid=1449131"
Community content is available under CC-BY-SA unless otherwise noted.