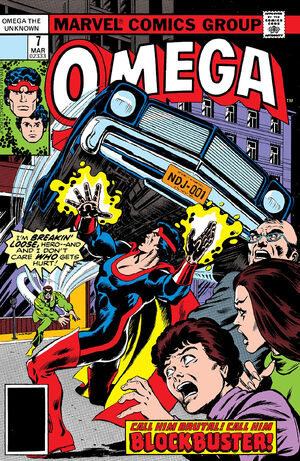 Omega awakens in the alley where James-Michael is still sitting, dumbfounded. He's about to explain their connection but the arrival of the police cut him off and the only word he speaks to James-Michael before disappearing is "secret", indicating that whatever happened should remain between them.

Elsewhere, Blockbuster is enraged that since his release from prison, the courts ruled his son remain in a foster home. He decides to rob a bank with the intent of using the money to provide for his son, despite not even being allowed to know where his son lives.

Amber and James-Michael meet Dian on their way to visit John Nedley in the hospital when Blockbuster attacks, prompting Amber to rush to the scene to take pictures for the Daily Bugle. Omega is consoling Gramps over the death of his girlfriend, saying his first words to the old man, "I...am...sorry" when he also hears the commotion from the bank and flies out the window to address it. Omega fights Blockbuster in a chase across town, but when Blockbuster describes his motivations for the robbery, Omega turns away and allows the criminal to escape, despite the angry jeers of the bystanders. James-Michael starts to understand that for whatever protective and heroic actions Omega takes, his mysterious doppelganger does not necessarily stand for law and order.

Retrieved from "https://heykidscomics.fandom.com/wiki/Omega_the_Unknown_Vol_1_7?oldid=1449135"
Community content is available under CC-BY-SA unless otherwise noted.