Part of the 'Original Sin' event 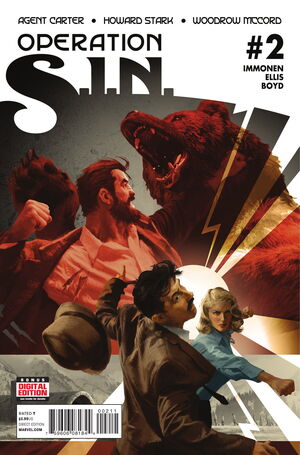 • When a UFO fires on Moscow because Howard can’t keep his finger off the button, Peggy and the team go underground but which one of them is already undercover?

• Peggy punches Howard in the face!

• The firecracker team of Kathryn Immonen and Rich Ellis turn up the heat and tear up the joint in the continuing adventures of AGENT CARTER!

Retrieved from "https://heykidscomics.fandom.com/wiki/Operation_S.I.N._Vol_1_2?oldid=1449258"
Community content is available under CC-BY-SA unless otherwise noted.