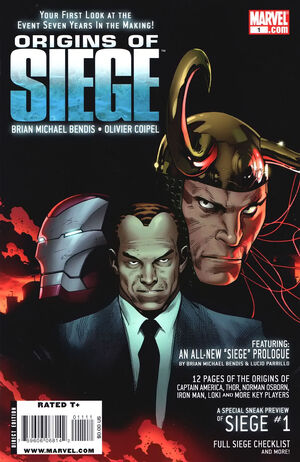 SIEGE is almost upon us! And this special giveaway issue contains everything readers will need to prepare themselves for the ultimate conflict to hit the Marvel Universe, six years in the making! Showcasing an ALL-NEW lead-in story featuring Loki, the God of Evil, ORIGINS OF SIEGE also contains an ALL-NEW origins section covering all of the major players in the battle, as drawn by the biggest artists at Marvel, as well as pinups and a checklist so you don’t miss a single important issue. All that and a preview of SIEGE #1! It’s time!

Retrieved from "https://heykidscomics.fandom.com/wiki/Origins_of_Siege_Vol_1_1?oldid=1753414"
Community content is available under CC-BY-SA unless otherwise noted.