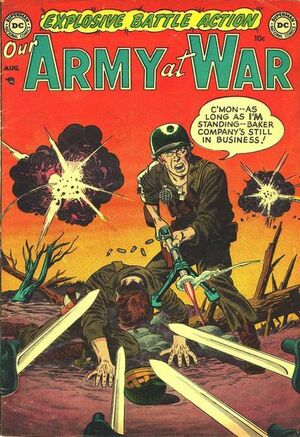 During a scouting detail in the Belgian countryside, Bert Brown and Eddie Marsh liken their assignment to their former Vaudeville acrobat act—warming up the audience for the headliners to follow. Eddie sees a flash of light from a farmhouse and the pair investigate. Entering the house using an acrobatic entrance performed in St. Louis, the pair are attacked by the German patrol hiding inside. The former acrobats use their performance skills to neutralize their foes with relative ease. Just as they finish and take a bow, their sergeant arrives and chides them for their levity.

Appearing in "Dig Your Foxholes Deep!"Edit

Synopsis for "Dig Your Foxholes Deep!"Edit

Late at night on an island in the Pacific, an Army sergeant orders his men to remain quiet at all costs until morning to keep their position secret. During the night, the soldiers are taunted by the enemy. When a grenade lands in a foxhole, one of the soldiers uses his helmet hoping to quiet the explosion and dies. Japanese scouts attack the remaining soldier in the foxhole and are eventually killed. The soldier dies from a stab wound just as the sun rises; his sergeant unaware he is dead.

In February 1943, "B" Company is pinned down by German forces in the Kasserine Pass. During the fighting, Lem "Kentuck" Elkins is scolded by his sergeant for removing his boots. When the unit makes its escape, Elkins's boots are shot full of holes, causing the young soldier to fall behind where he spots an enemy machine gun nest. After Elkins and his sergeant neutralize the machine gun nest, the unit rests. Elkins picks up a stray dog to the chagrin of the sergeant once the unit begins moving again. With the German Afrika Korps behind them, they soon arrive at a mine field. Elkins, unaware the unit has stopped, inadvertantly leads the unit out of the mine field. His fellow soldiers initially attribute his good fortune to having "radar feet" but Elkins says he was only following orders to keep moving.

An island in the South Pacific has just been mostly cleared of Japanese forces. Pete, a US Marine, pokes fun at his brother Joey, a US Navy seabee assigned to build an aircraft landing strip on the island. Pete's unit is attacked by insurgents that manage to destroy their tanks. The unit regroups to halt the attacks but are soon pinned down by sniper fire. Joey arrives, driving his bulldozer, and helps rout the snipers' position. Upon approaching a cave, the unit is attacked again. Joey climbs to the top of the ledge on top of the cave and uses a jackhammer to trap the enemy insurgents under rubble. Soon afterward, the remnants of Japanese opposition use the Marines' own foxholes to outflank and attack. Joey thwarts the attack when he uses a crane to pin the enemy forces under sheets of steel field matting to be used for building the landing strip. The Marines ask how they can repay Joey for his help, he responds by saying they can help the seabees build the airstrip.

Retrieved from "https://heykidscomics.fandom.com/wiki/Our_Army_at_War_Vol_1_1?oldid=1444816"
Community content is available under CC-BY-SA unless otherwise noted.