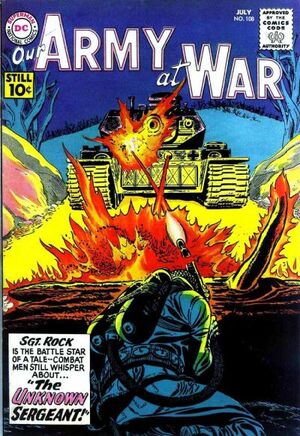 Appearing in "The Unknown Sergeant!"Edit

Synopsis for "The Unknown Sergeant!"Edit

While Easy Co. is regrouping after a battle in France, they happen upon a monument to an unknown soldier which bares an uncanny resemblance to Sgt. Rock. During their next skirmish, Rock is knocked for a loop by an explosion. When he gets his barrings, it appears that he's been transported back in time to the year 1777 and the Revolutionary War. There, Rock sacrifices himself to help the United States militia fight off the attacking British army.

He then finds himself transported to the Civil War era, where he is a member of the Confederate Army, where he sacrifices his life for their cause. When his body is found by Union soldiers, they recognize him as an unknown soldier fighting for his cause.

Finally, Rock finds himself transported to World War I, where he once more sacrifices himself to stop a German air strike. Rock wakes up in his own time, and helps his soldiers finish their battle. The battle is won when an unknown soldier sacrifices his life to destroy a Nazi tank. After the battle they salute all unknown soldiers who have died in war.

Appearing in "Ace on My Wing"Edit

Synopsis for "Ace on My Wing"Edit

Retrieved from "https://heykidscomics.fandom.com/wiki/Our_Army_at_War_Vol_1_108?oldid=1444922"
Community content is available under CC-BY-SA unless otherwise noted.