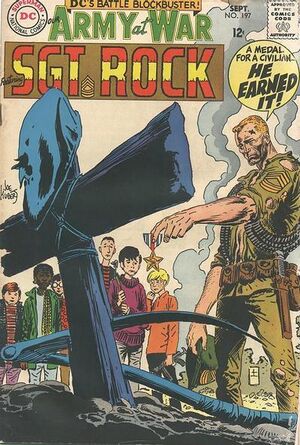 Appearing in "Last Exit for Easy"Edit

Synopsis for "Last Exit for Easy"Edit

Sgt. Rock and Easy Company receive medals from the mayor of Dunkirk. During the ceremony, the Nazis attack. Sgt. Rock and Unit 3 defeat the enemy tanks, then mourn the mayor who was killed. Reinforcements arrive to hold the area, but a Nazi attack has nearly wiped them out. Sgt. Rock and his men then provide support during an evacuation. Many French people help them including young children such as Yves and Edith Duchamps. Easy helps the last of the ships escape, but Yves is killed. Sgt. Rock leaves his medal on the boy's grave, and Edith joins Unit 3.

Appearing in "No Foxhole for Baby"Edit

Synopsis for "No Foxhole for Baby"Edit

The Medic of Able Co., who are fighting outside a small French town, is asked to assist a pregnant woman and her husband to get them to her family's ancestral home so that she can deliver her baby where she and generations of her family had been born. One small problem, however, they have to get through the installed Nazi forces who control the town. The medic uses some quick-thinking and some luck to overcome the odds, but gets her to the house and delivers the baby that then becomes the mascot of the Company.

Retrieved from "https://heykidscomics.fandom.com/wiki/Our_Army_at_War_Vol_1_197?oldid=1445011"
Community content is available under CC-BY-SA unless otherwise noted.