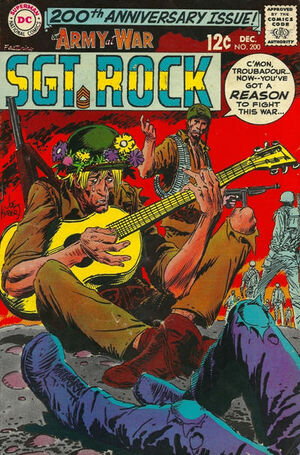 Sgt. Rock and Easy Company find the last survivor of a unit that was hit by an enemy attack. The soldier carries a guitar and is nicknamed Troubadour. The new soldier then joins Easy as they approach a nearby town. Rock notices that the people in the town are acting odd. He suspects an ambush and orders everyone to take cover. The Nazis attack and use the townspeople as shields. Troubadour surrenders in order to save the civilians.

When the Nazi's smash his guitar, the peaceful Troubadour gets angry. He picks up the guitar and hits the Nazi commander. The rest of Easy joins in and together they defeat the enemy unit. Troubadour then carries on with his music.

Appearing in "The Ace and the Joker"Edit

Synopsis for "The Ace and the Joker"Edit

Lt. Bix Benton finds himself explaining to three WWI German aces, who are ready to shoot him, that he did not shoot down their comrade, but that it was his Sopwith Camel, "Beast", who did it. They don't believe him until "The Beast" attacks them, unpiloted.

Retrieved from "https://heykidscomics.fandom.com/wiki/Our_Army_at_War_Vol_1_200?oldid=1445014"
Community content is available under CC-BY-SA unless otherwise noted.