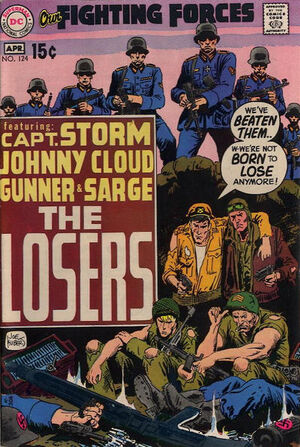 The Losers are given a WWI plane to fly up to a castle where the Nazis are holding a child monarch prisoner in order to secure the good behavior of his subject people. They rescue the boy by parachuting down to the moat and then rigging a statute of Hitler to blow up upon their pursuers. Once the king is safe, the Losers turn him over to Allied forces.

Retrieved from "https://heykidscomics.fandom.com/wiki/Our_Fighting_Forces_Vol_1_124?oldid=1445242"
Community content is available under CC-BY-SA unless otherwise noted.