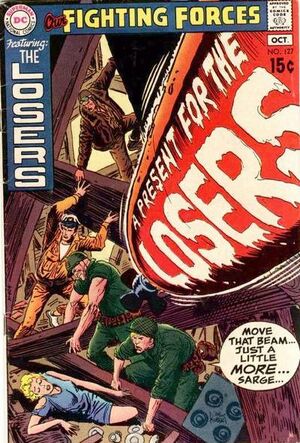 Appearing in "Angels over Hell's Corner"Edit

Synopsis for "Angels over Hell's Corner"Edit

The bad luck of the Losers rubs off on a nurse and RAF pilot who engage to be married in four weeks and invite the Losers to the wedding. After repulsing an attack upon invasion barges the Losers realize that they will be in time for the wedding after all. When they arrive, Linda is gunned down by a Stuka on the ground while saving the lives of children. Bill takes revenge by shooting the Stuka down, but runs out of ammo and so rams its partner. He manages to land his plane and tell the Losers to apologize to Linda that he is late for the wedding and then succumbs to his injuries. The couple are buried together and Gunner doesn't want to hear anybody call them losers but Sarge tells him that they're not, as they're together forever now. When they ask Cloud what he sees he tells them that he sees angels over Hell's Corner in the sky.

Retrieved from "https://heykidscomics.fandom.com/wiki/Our_Fighting_Forces_Vol_1_127?oldid=1445245"
Community content is available under CC-BY-SA unless otherwise noted.