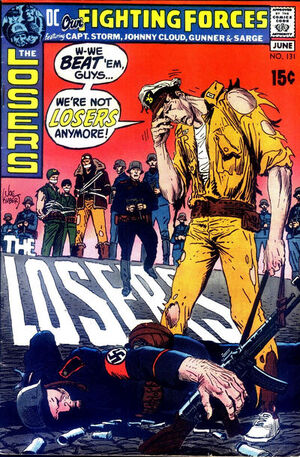 Appearing in "Half a Man"Edit

Synopsis for "Half a Man"Edit

After two incidents involving his wooden leg, Captain Storm feels that he is only half a man. First a grenade is tossed at him and he slips, so instead of catching it and disposing of it, he accidentally bats it at a child freedom fighter who is killed when it detonates. Second, when the Losers are on leave he meets a pretty flower seller who would like to dance and he does ok with her for awhile but then his wooden leg buckles and he takes a spill. He leaves the dance hall because he does not want her pity. She follows him and he sees some stonework about to give way and fall on her, but because of his wooden leg, he is too slow to reach her in time to save her from being crushed. The Losers are sent on an assignment to capture a mayor from an area occupied by an elite Nazi outfit. Captain Storm grabs their target and parachutes out the window, but because of the extra weight, his wooden leg shatters upon landing. The mayor tells the Losers that he ought to leave the cripple behind and let him go free. Captain Storm agrees about leaving him and orders the Losers to take the mayor to their pick up point and he holds off the elite group in some ruins. Storm knows that if he opens up with his machine gun, they will finish him off fast and catch up to the Losers, so he attempts to delay them as long as possible by appealing to their fighting pride. The first underling to accept his challenge he readily defeats, but the tough guy boss tells his men to hold their fire while he roughs up Storm. Storm takes quite a beating refusing to tell where the Losers have taken the mayor, but he holds out long enough for the Losers to return and save him. Captain Storm asks them why they didn't just leave half a man behind and they tell it isn't the outside what's important but what's inside that makes a man.

Retrieved from "https://heykidscomics.fandom.com/wiki/Our_Fighting_Forces_Vol_1_131?oldid=1445249"
Community content is available under CC-BY-SA unless otherwise noted.