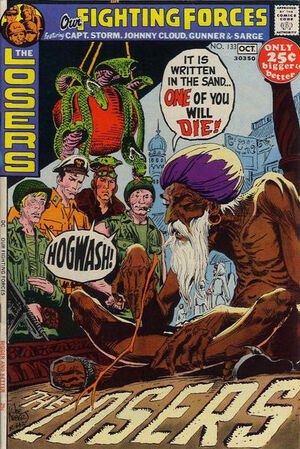 Appearing in "Heads or Tails"Edit

Synopsis for "Heads or Tails"Edit

The Losers are sent into the jungle to take out three Japanese generals that aim to disrupt the Burma Road and thus make India vulnerable. While in the jungle the Losers encounter an elephant being attacked by a tiger. They throw rocks to dislodge the tiger and then prepare to shoot the elephant as it approaches. A young Sikh girl who wishes to fight as a soldier has been following them. She warns them not to shoot the elephant as he only wishes to thank them for helping with the tiger. The Sikh girl can ride the elephant and gets the Losers to their destination. The Losers don't want the kid to be hurt fighting with them, but when it is obvious they need some sort of diversion to reach their targets, the girl has the elephant push down one of the temple walls. The Losers succeed in their mission, but the girl is hurt, revealing her sex as they had assumed she was a boy the way she had dressed. She explains as she recovers in the hospital that she comes from a family of warriors and wanted to fight as well. The Losers give her four medals.

Retrieved from "https://heykidscomics.fandom.com/wiki/Our_Fighting_Forces_Vol_1_133?oldid=1445251"
Community content is available under CC-BY-SA unless otherwise noted.