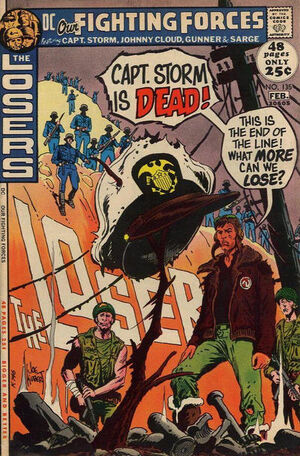 Appearing in "Death Picks A Loser"Edit

Synopsis for "Death Picks A Loser"Edit

A fortune teller says that one of the Losers will die, and then a Nazi plane slams into her tent leading the Losers to believe that some of their bad luck must have rubbed off on her. The Losers are given a mission in Norway to organize a village into freedom fighters against the Germans. At first, Captain Storm is told that he shouldn't go due to the difficulty in getting around the terrain with a wooden leg, but the other Losers protest, and he is allowed to join them. Storm keeps up well until they convince the population to leave their homes and fight the Germans from the hills. When the bombs that the Losers have placed in each home to deny the Germans a base do not go off as expected, Storm heads down to see what the problem is. The village suddenly erupts and the Losers are sure that Storm could not have gotten clear in time with his wooden leg. A village girl named Ona who has lost her father to the Germans and now her home offers to take Captain Storm's place among the Losers.

Retrieved from "https://heykidscomics.fandom.com/wiki/Our_Fighting_Forces_Vol_1_135?oldid=1445253"
Community content is available under CC-BY-SA unless otherwise noted.