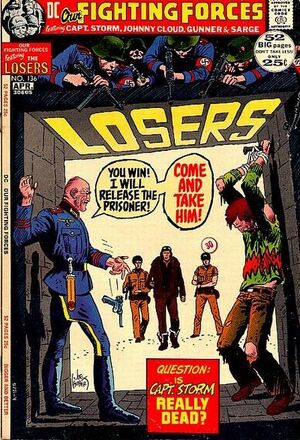 Appearing in "Decoy for Death"Edit

Synopsis for "Decoy for Death"Edit

Ona heads down to the village to chat up the Nazis for their plan to attack her people. The captain doesn't give her the information she wants, but she is able to convince one of the captain's guards that he has taken her into his confidence and he spills the beans. She uses Captain Storm's wooden leg as the drop point to get the information to the Losers so that they can ambush the Nazi forces and she escapes the town. After Ona rejoins the Losers Sarge remarks that it's funny Storm's Loser bad luck only deserted him after he was dead.

Retrieved from "https://heykidscomics.fandom.com/wiki/Our_Fighting_Forces_Vol_1_136?oldid=1445254"
Community content is available under CC-BY-SA unless otherwise noted.