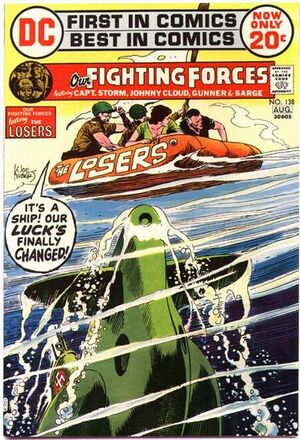 The Losers are stationed aboard a British sub off the English coast in order to locate the German weapon which is sending ships to the bottom. Ona suggests that she board a raft alone so the enemy won't suspect anything. Sarge and Gunner don't think it's a good idea, but Captain Cloud overrules them and allows her to go. She is picked up by a German ship that is disguised as an American freighter. The sub captain wants to attack, but the Losers demand they be allowed to make a rescue attempt first. The captain gives them some shillings which are in reality explosive charges. The German ship picks the Losers up from their raft and the captain begins to interrogate them when the British sub surfaces. The Germans manage to sink the sub, but when the Losers are about to be hanged, they use the coins and send the German ship to the bottom. The Losers swim to a life raft where they are told of a one-legged one-eyed pirate.

Retrieved from "https://heykidscomics.fandom.com/wiki/Our_Fighting_Forces_Vol_1_138?oldid=1445256"
Community content is available under CC-BY-SA unless otherwise noted.