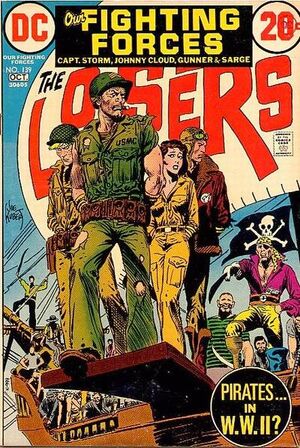 The Losers are given a mission to hijack a new Nazi rocket fuel on its way to Berlin for testing. En route to intercept the carrier vessel, they find that they arrived too late to prevent it from being plundered by a pirate. The pirate offers to sell the fuel to the highest bidder. The Germans send a representative and the Losers attend with 20,000 dollars to bid. The Germans also have a limit of 20,000 dollars, so the Losers empty their pockets and come up with 20,026.83. The pirate sells them the fuel, but he anticipates the Germans will be sore losers, so his men open fire on the Germans when they attempt to seize the fuel by force. The German commander goes over the side of a cliff with the fuel, so neither the Allies or the Nazis are able to attain it.

Retrieved from "https://heykidscomics.fandom.com/wiki/Our_Fighting_Forces_Vol_1_139?oldid=1445257"
Community content is available under CC-BY-SA unless otherwise noted.