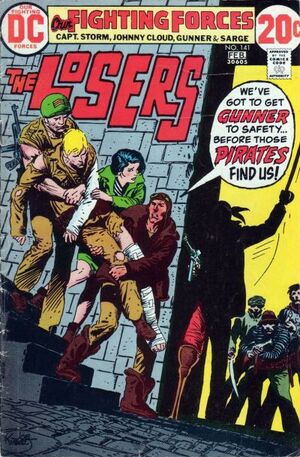 Appearing in "The Bad Penny"Edit

Synopsis for "The Bad Penny"Edit

Ona returns to her village in order to assassinate her uncle the mayor because he has been aiding the Nazi war effort. Her attempt is interrupted by the Losers who follow her and they are about to be executed by the German soldiers working with the mayor when the pirate they have encountered before conducts a raid. The mayor plays on family ties in order to get close enough to seize Ona's gun, but when he does, it goes off and he dies. The Losers help the pirate's men put paid to the Germans and are surprised when the pirate holds them at gunpoint. He demands their valuables, and when Ona is hesitant to hand over Captain Storm's dog tag, the pirate grabs the dog tag and a cloud over his memory is lifted. The pirate is revealed as Captain Storm! He lost an eye in the explosion of Ona's village and looters figured he was so lucky to have lived through it that they made him their leader. Captain Storm is joyously welcomed back to the ranks of the Losers.

Retrieved from "https://heykidscomics.fandom.com/wiki/Our_Fighting_Forces_Vol_1_141?oldid=1445259"
Community content is available under CC-BY-SA unless otherwise noted.