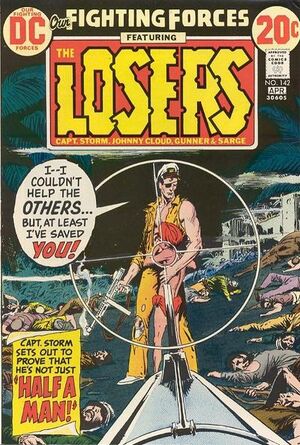 The Losers, except for Captain Storm, are sent to the African desert to assassinate a man the natives think of as the incarnation of Saladin. This angers Storm and he sets off alone to prove that he can get the job done. The Losers tail him and play guardian angel so that he won't be killed by Saladin's forces. While Storm saves a native boy from a lion the Losers get captured by Saladin. As Saladin prepares to have them executed, Storm and the boy intervene. Storm can't shoot Saladin without hitting the Losers in the crossfire so he closes in and finishes him off with one of the native's swords. Storm is proud to have saved the Losers and completed the mission all by himself, but the boy reminds him that he had the aid of Allah.

Retrieved from "https://heykidscomics.fandom.com/wiki/Our_Fighting_Forces_Vol_1_142?oldid=1445260"
Community content is available under CC-BY-SA unless otherwise noted.