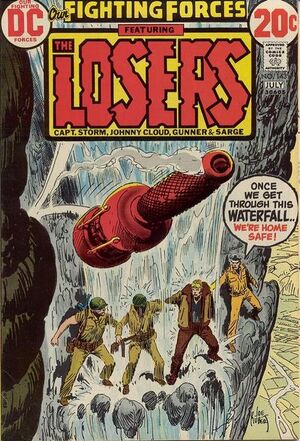 Appearing in "Diamonds Are for Never"Edit

Synopsis for "Diamonds Are for Never"Edit

The Losers are sent to an African diamond mine in order to prevent the Germans from getting ahold of diamonds. The Losers notice the Germans are inside so they blow up the mine entrance with themselves inside. They find a way out through a hole in the ceiling, except the Nazi troops are waiting and lob a grenade at Captain Storm. Storm is fast enough to catch it and throw it back. The Losers pursue the diamond couriers but when a monkey snatches up the diamond sack and distributes the shiny stones among his buddies in the trees, they know that they will have to report back that a monkey made brass monkeys of them all.

Retrieved from "https://heykidscomics.fandom.com/wiki/Our_Fighting_Forces_Vol_1_143?oldid=1445261"
Community content is available under CC-BY-SA unless otherwise noted.