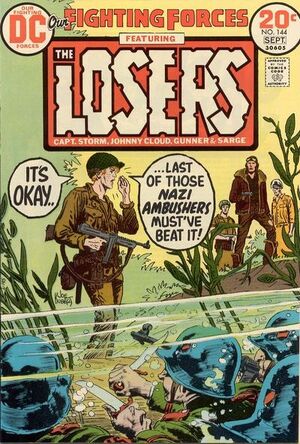 Appearing in "The Lost Mission"Edit

Synopsis for "The Lost Mission"Edit

While still in Africa from their last mission the Losers come across a dying British soldier who informs them of a raft of explosives upstream intended to ram a German fort and begs them to complete the mission. After he kisses Ona, the man dies, and the Losers accept his mission without debate. They fight off some Nazis while taking the raft to the fort, but when they draw close, they can tell that the spotlights will allow the Germans to pick them off with mortars before the raft can get close enough to ram. Captain Storm comes up with an idea to decoy the German spotlights with the raft partially disassembled and the explosives removed. After the Germans have been lulled into a sense of security, the Losers send individual logs rigged with explosives floating into the fort. The dead soldier's mission accomplished, the Losers find themselves at an outpost of the French foreign legion.

Retrieved from "https://heykidscomics.fandom.com/wiki/Our_Fighting_Forces_Vol_1_144?oldid=1445262"
Community content is available under CC-BY-SA unless otherwise noted.