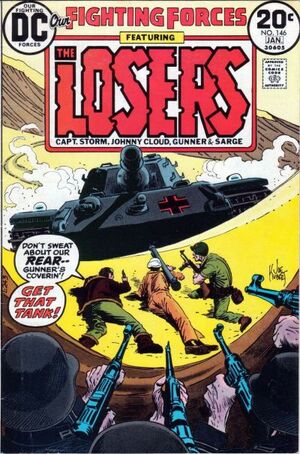 Appearing in "The Forever Walk"Edit

Synopsis for "The Forever Walk"Edit

The Losers encounter a mirage of an oasis guarded by Germans while walking through the desert. Ona collapses from lack of water and Gunner takes a more personal interest in her. Gunner and Captain Cloud become hostile towards one another as Gunner vents his frustration by firing bursts at the circling buzzards and the other Losers demand that he conserve ammo. A German plane tries to shoot them but the Losers succeed in destroying it. They discover the plane was protecting a German cache of water. The Losers attempt to hold off the approaching German tanks onto their position, but when Ona is threatened, Gunner leaves his position in order to aid her. Another German tank gets through the area that Gunner was guarding and the Losers are forced to retreat. Ona blames herself for the discord that the Losers are going through and so, during a sandstorm, she marches off alone into the desert.

Retrieved from "https://heykidscomics.fandom.com/wiki/Our_Fighting_Forces_Vol_1_146?oldid=1445264"
Community content is available under CC-BY-SA unless otherwise noted.