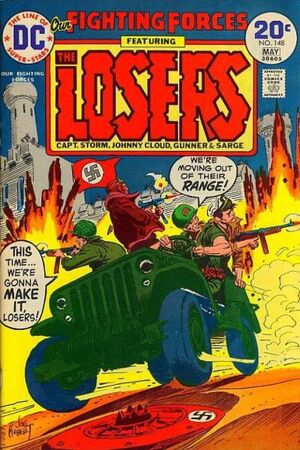 Appearing in "The Last Charge"Edit

Synopsis for "The Last Charge"Edit

Johnny Cloud saves a native girl named Ramallah from German soldiers preparing to despoil a local oasis. The girl's grandfather gives Ramallah to Johnny as his bride and she is happy with the turn of events as a prophecy has claimed her future husband will save her from bandits. Johnny isn't that happy about a marriage he doesn't want, but before he can diplomatically bow out, the Germans begin shelling the Arab camp after following them back from the oasis. Ramallah is fatally wounded in the retreat and dies after a brief wedding ceremony to Johnny conducted by her grandfather. The tribe demands revenge against the Germans holed up in a fort and the Losers plan to use the German explosives they had intended for the oasis against the enemy. The dead girl's grandfather leads a charge against the fort while the Losers send a jeep packed with explosives in from behind. The explosives touch off a larger blast within the fort, destroying the Germans. The Losers discover that the girl's grandfather has suffered fatal wounds in the charge, but is happy Allah allowed him one final great victory. The Losers resume their search for Ona.

Retrieved from "https://heykidscomics.fandom.com/wiki/Our_Fighting_Forces_Vol_1_148?oldid=1445266"
Community content is available under CC-BY-SA unless otherwise noted.