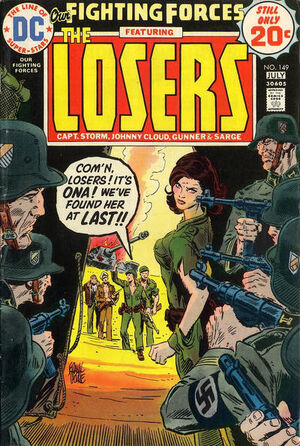 Appearing in "A Bullet for a Traitor!"Edit

Synopsis for "A Bullet for a Traitor!"Edit

Ona has been picked up by a German officer that she had been romantically involved with in the past. She socializes with him as that is the only way she can remain with a wounded prisoner she loves who is also in the same camp. The Losers meet up with a by-the-book British colonel who arranges to get the Losers put under his command. He orders them to act as a distraction on the German base where Ona is. When the Losers attack, the German officer rushes to Ona to protect her and they are found together by Gunner. Gunner orders the officer to back away as he steels himself to shoot Ona as a traitor, but he finds that he cannot gun her down in cold blood and rejoins the Losers in tears, denying that he had encountered anyone of interest.

Appearing in "Trial by Combat"Edit

Synopsis for "Trial by Combat"Edit

Baron Egon Von Eisen commands a Zeppelin on a bombing raid over England.

Retrieved from "https://heykidscomics.fandom.com/wiki/Our_Fighting_Forces_Vol_1_149?oldid=1445267"
Community content is available under CC-BY-SA unless otherwise noted.