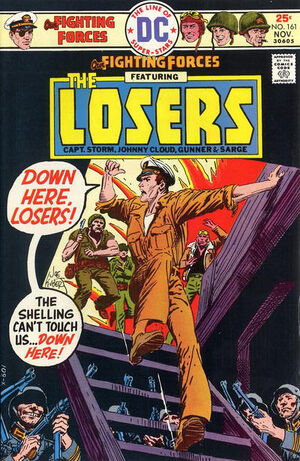 Appearing in "The Major's Dream"Edit

Synopsis for "The Major's Dream"Edit

A major with a recurring nightmare concerning a multiple-armed monster crushing him in the dark allies with the Losers to secure a forward position in Burma against the Japanese. The major is tormented by guilt that his squad was wiped out at the temple he and his guide are leading the Losers to when they spot the Japanese and call in a strike on their position. They hide in tunnels beneath the ruined temple as the Japanese search for them. The major has a nervous breakdown, firing shots which alert the Japanese to their presence. They throw grenades which cause a cave-in and separate the major from the Losers and his guide. When the major regains consciousness he feels that he is living his nightmare as he sees the twisted idols in the room. He flees down the corridor and screams. As the guide leads the Losers to the exit, they find the major dead, crushed beneath a fallen statue of the goddess Kali.

Retrieved from "https://heykidscomics.fandom.com/wiki/Our_Fighting_Forces_Vol_1_161?oldid=1445279"
Community content is available under CC-BY-SA unless otherwise noted.