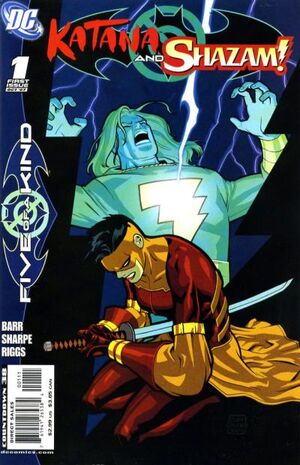 After facing an attack from mystical beings and an assassin calling herself "Battleaxe", Katana learns of a rebellion taking place inside of the mystical realm in her Soultaker Sword, the Fukumaden. She stabs herself with the Soultaker to enter the Fukumaden, and finds that her Brother-in-Law Takeo, the man responsible for slaying her family, has become Emperor of the realm. Takeo plans on escaping and invading the real world. Katana is joined in her fight by Marvel, who perceives the trouble in the Fukumaden as a threat to the mystical community, which he oversees. While Katana's soul fights Takeo inside Fukumaden, Battleaxe, in league with the Emperor, arrives at Katana's home with the intention of slaying her mortal body. Battleaxe is stopped by Marvel, and Katana is drawn back into reality before she can slay Takeo again.
Later on, Batman reveals to her that the turmoil in her sword, brought to his attention by Zatanna, was actually her trial mission. He assigned Marvel to help her out. While Batman accepts Katana as the first member of his new team of Outsiders, he decides not to include Marvel. While he had been looking for someone capable of dealing with magical problems, he decides Marvel is too wrapped up in the Magic, and isn't down to Earth enough for his team.

Retrieved from "https://heykidscomics.fandom.com/wiki/Outsiders:_Five_of_a_Kind_-_Katana/Shazam_Vol_1_1?oldid=1445436"
Community content is available under CC-BY-SA unless otherwise noted.