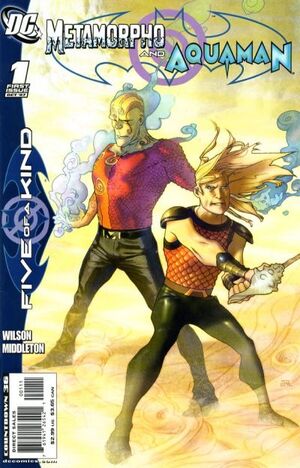 The sword doesn't look so cheesy when it's in your face, huh?

Metamorpho and the new Aquaman are sent into the Sahara Desert to help resolve a military conflict, over an underground reservoir. They meet and come into conflict with a witch using the Orb of Ra, known as "Halcyon" who serves as a protector of the Reservoir, and is fighting industrialist Simon Stagg, former father-in-law to Metamorpho. After uncovering poisons Stagg is unloading in the water in claimed attempts to purify it, Metamorpho decides to shut down the conflict on both sides, then goes to purify the reservoir himself. He also decides to destroy the Orb of Ra, in which he apparently succeeds, but only thanks to the help of Halcyon. Although legally he should arrest her for her actions in battle, Metamorpho decides to allow her to escape.
Later, Batman congratulates him on his tactics, especially valuing his interaction with the witch, believing she will spread word of the Outsiders to other underground types. However, although Metamorpho is admitted and the mission was successful, he decides not to include the new Aquaman on his team, deciding that although he was valuable, he couldn't measure up to his predecessor.

Retrieved from "https://heykidscomics.fandom.com/wiki/Outsiders:_Five_of_a_Kind_-_Metamorpho/Aquaman_Vol_1_1?oldid=1445437"
Community content is available under CC-BY-SA unless otherwise noted.