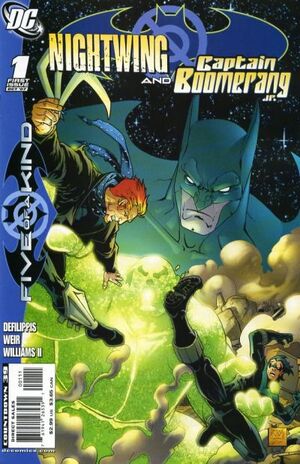 I need a team people expect the worst from-- a team that bad guys see as kindred spirits. All those "screw-ups" you refer to-- the coup in Africa, the Nuke in Russia, the Prison Riot-- they got you branded as terrorists. As much as you hate it, that's exactly why the Outsiders will accomplish things no so-called heroes can. And if you refuse to be a part of that, well... then you're everything I always hoped you would be. Go back to the good fight, Dick. Leave the bad fight to us.

Batman begins auditions for his new team of Outsiders, having just gained control of the team from Nightwing. He announces to the Outsiders that they will be trying out for their own jobs, put together in pairings. The first team, Nightwing and Captain Boomerang are given a mission to deal with a S.T.A.R. Labs problem in Space, involving the recently retrieved Chemo. After witnessing radioactive carnage on the Space Station, caused by stray pieces of Chemo, and having to fight the creature themselves, Nightwing decides it would be best if he could fling Chemo into the Sun. Captain Boomerang reveals loyalties he still has to Amanda Waller and the Suicide Squad, when he refuses to allow Nightwing to destroy Chemo. Waller intends to use Chemo for good, having him do government cleanup work. The two are drawn into a fight over what course of action to take, which ends with Boomerang using his Super-Speed to imprison Nightwing in an airlock, and forcibly taking Chemo back to Earth. Captain Boomerang turns down the Outsiders, and decides to join the Suicide Squad as a full-time member. Likewise, angry at the cold, disrespectful attitude Batman takes to his fellow teammates, Nightwing also refuses membership.

Retrieved from "https://heykidscomics.fandom.com/wiki/Outsiders:_Five_of_a_Kind_-_Nightwing/Boomerang_Vol_1_1?oldid=1513939"
Community content is available under CC-BY-SA unless otherwise noted.