Start a Wiki
Part of the 'Countdown to Final Crisis', and 'Death of the New Gods' events 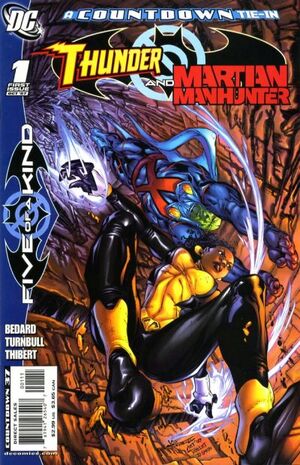 I am grateful for your kindness. I shall repay it with a swift and painless end.

As their test for entrance into Batman's new group of Outsiders, Thunder and Martian Manhunter are sent underground, investigating the inhabitance of Grayven, a New God, son of Darkseid, teleported to the bowels of the Earth by Zeta-Beam after a conflict with Kyle Rayner and Adam Strange. Although he had at one point escaped, Grayven, fleeing the mysterious God Killer, has returned underground, and begun construction on a Zeta-Beam machine. He plans to wait for the God Killer to find him, and then teleport the being to Darkseid's throneroom, where either one slaying the other will result in his own benefit. Thunder and Martian Manhunter agree to help Grayven finish constructing his machine, and even restore his mind after the partial lobotomy given to him by Kyle Rayner. Although Grayven is at first complacent, he attempts to kill the two heroes after their work is done. Martian Manhunter, after seemingly fleeing, disguises himself as the Black Racer, and claims to Grayven to be the God Killer. He then informs Grayven that his heritage is false, and as a non-God, he is unworthy of the Black Racer's attention. Furious, Grayven uses the Zeta-Beam to teleport himself directly into Darkseid's throne room, where he plans on defeating his father once and for all. However, he is instead almost immediately slain by the actual God Killer instead.

Batman reviews the mission with the two of them, and Martian Manhunter is accepted into the new group of Outsiders. Thunder, however, is denied, for although J'onn had only been instructed to follow her orders, she had returned a warmongering conqueror to full potency, and set him loose.

Retrieved from "https://heykidscomics.fandom.com/wiki/Outsiders:_Five_of_a_Kind_-_Thunder/Martian_Manhunter_Vol_1_1?oldid=1549310"
Community content is available under CC-BY-SA unless otherwise noted.