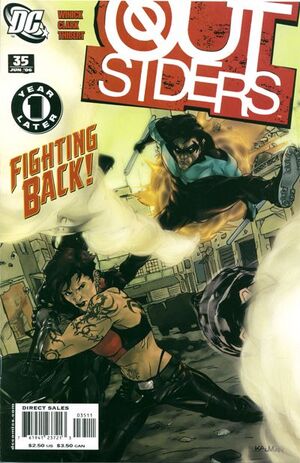 Grace Choi and Captain Boomerang torture Colton Mirubu, desperate to discover the location of the dictatorial Ratu Bennin's supply of deadly sarin gas. Thunder protests the torture, but Nightwing reminds her that she was in deep cover to discover the gas' location, and that her decision to blow her cover made the torture necessary. Thunder still has her doubts, but the rest of the Outsiders are with Nightwing. Having discovered the location of the gas the Outsiders infiltrate one of President Bennin's facilities, discovering a stockpile large enough to wipe out an entire country. Before they can destroy the gas, however, they are taken out one by one. Ratu Bennin, angry that the Outsiders are in Mali, has unleashed his secret weapon - a black-clad speedster!

Retrieved from "https://heykidscomics.fandom.com/wiki/Outsiders_Vol_3_35?oldid=1445395"
Community content is available under CC-BY-SA unless otherwise noted.