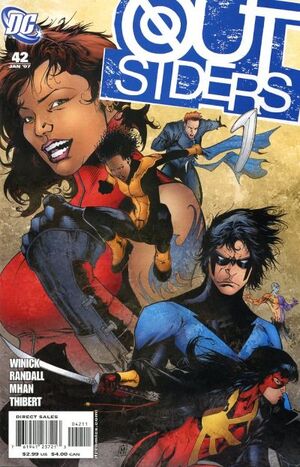 I thought a change from my former flag-bearing costume might be warranted... since, in light of our being "outed," my home country of Japan has revoked my citizenship.

Movie star Taylor Clay is in Sydney, Australia with his agent preparing for a big shoot. Clay despises the location, and desperately wishes to return to New York. In the sky high above, Saber launches a special missile known as a Luddite striking the ground below. The missile shorts out all electrical systems within the immediate area, including higher brain functions. Taylor Clay, and millions of Australians spontaneously develop instantaneous amnesia.

Elsewhere, Nightwing briefs the Outsiders on recent events. He tells them about the Luddite technology, and that the trail leads back to Doctor Sivana. Following the briefing, the team piles into the Pequod and tracks Sivana to his island stronghold.

Sivana emerges piloting a large Mecha armor. The heroes spring into action, and it is Grace who ultimately brings the machine down. As the rest of the crew are prepared to apprehend Sivana, Saber fires a toxic dart into Nightwing's neck.

Retrieved from "https://heykidscomics.fandom.com/wiki/Outsiders_Vol_3_42?oldid=1445402"
Community content is available under CC-BY-SA unless otherwise noted.