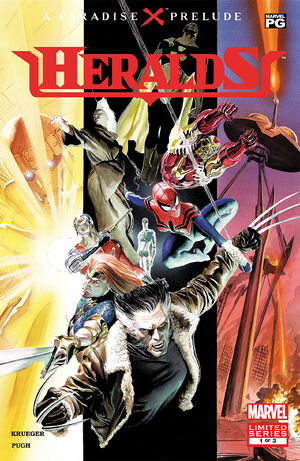 o THE SCOOP: The final chapter of the EARTH X trilogy begins with the prelude to PARADISE X!

o THE STORY: To deliver a desperate warning to the Multiverse, the living computer known as X-51 forms a team of champions selected from different realities! Behold the Heralds: Wolverine, resurrected from the Days of Future Past! Deathlok, the Machine Man! Killraven, the Warrior of The Worlds! Bloodstorm, the vampire from MUTANT X! Iron Man 2020, the corrupt nephew of Tony Stark! Hyperion, the last living member of the Squadron Supreme! Spider-Girl, the daughter of Spider-Man! But will this warning come too late? Or not soon enough? What will be the fate of this wild alternate future?

o THE CREATORS: Master architect Alex Ross and writer Jim Krueger unite once again-- and are joined by the pencils of Steve Pugh (GENERATION X)!

o THE FORMAT: The debut of this monthly, three-part mini-series is 32 pages, with ads. Each issue is printed on glossy stock with a cardstock cover.

Retrieved from "https://heykidscomics.fandom.com/wiki/Paradise_X_Heralds_Vol_1_1?oldid=1756115"
Community content is available under CC-BY-SA unless otherwise noted.