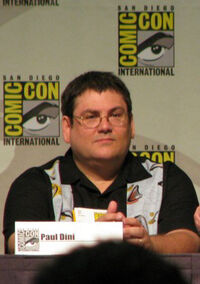 Paul Dini is a writer and one of the executive producers for the 1992 television program, Batman: The Animated Series. In addition to his television projects, Paul has contributed his talents to the Batman family of titles, many of which take place within the continuity of the various animated programs. He recently has been writing for television programs made by Marvel Animation, including Ultimate Spider-Man.

Retrieved from "https://heykidscomics.fandom.com/wiki/Paul_Dini?oldid=150173"
Community content is available under CC-BY-SA unless otherwise noted.