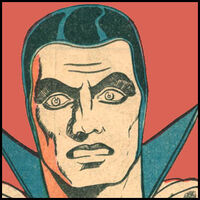 In 1540, during the Roger's Rebellion in Scotland, conspirators brought Prince James of England to a fortress and murdered him. Such treachery caused his spirit to rise from his body and he strangled the traitors. His spirit continued to live within the fortress's walls for 200 years.

During WWII, The Home Security Ministry of London decided to preserve the fortress by dismantling it and shipping it to a sanctuary in America. Stone by stone the historic building was torn down, and while on its journey, a German submarine torpedoed the British ship, blowing everything to bits.

As the ship sunk, a vapor form appeared above, and the spirit of the martyred prince returned to roam the world as Mr. Justice.

Retrieved from "https://heykidscomics.fandom.com/wiki/Paul_Morse_(Earth-MLJ)?oldid=1584002"
Community content is available under CC-BY-SA unless otherwise noted.