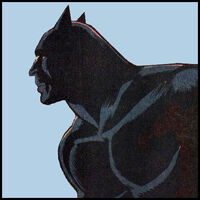 I don't think I need to testify. Here's the evidence! Have these pix developed and send them to The Daily Globe with the Fox's compliments!

When Paul Patton, The Daily Globe staff photographer, and reporter Ruth Ransom went to West Virginia to get the scoop on the notorious Night Riders gang, Paul was kidnapped upon his arrival by the hoods and taken to a lonely country road. After whipping him, the gang left him unconscious in the woods. The next morning, he woke up and climbed aboard a New York-bound freight train. When he stumbled into the newspaper's office, his editor shouted at him to head back and take some photos for the paper. That night, while sulking, he hit upon an idea on how to "out fox" other reporters, and designed a costume where he could hide his "Syncro-Flash Automatic Camera."

Now dressed as the Fox, he went back to the lonely road in West Virginia, and found reporter Ruth Ransom and a sheriff being tied up and ready to be whipped by the Night Riders gang. When he leapt into action, the thugs were paralyzed as his camera "flashed" away. After the rescue, he published his pictures for the late night edition of the paper.

He continued being a staff member of the paper, and in his black Fox uniform, and concealed candid camera, became a terror to the underworld.

Retrieved from "https://heykidscomics.fandom.com/wiki/Paul_Patton_(Earth-MLJ)?oldid=1580623"
Community content is available under CC-BY-SA unless otherwise noted.