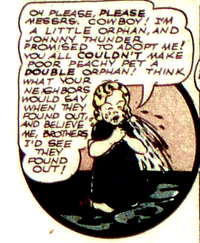 In the early 1940s, the hyperactive orphan Peachy Pet became the adopted daughter of Johnny Thunder. Her impulsive behavior led her to be the protagonist of the most comical situations. When Johnny was trapped in the Ragnarok limbo along with the rest of the JSA, Peachy, now an adult woman, made a fortune with a frozen yogurt company. She was later converted to a djinn and went to live in the Fifth Dimension alongside Thunderbolt.[1]

Retrieved from "https://heykidscomics.fandom.com/wiki/Peachy_Pet_(Earth-Two)?oldid=1678627"
Community content is available under CC-BY-SA unless otherwise noted.