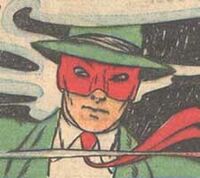 Perry Chase was the son of the owner and publisher of The Daily Express, a newspaper covering a major metropolitan area. Perry was assigned to the society page, but desperately wanted to be a serious reporter and begged his father for a chance. However, his father told him to continue to cover reporting on high society's doings because only real men can be reporters and his seemingly wimpy and unintelligent son was not a real man. Little did his father know that his son was in fact the Press Guardian, defender of the first amendment and a crime fighter.

Later, Perry obtained a new secretary named Cynthia Blake, who became a constant companion on many of his assignments for the society page and more importantly on his adventures as the Press Guardian.

One of the greatest foes that the Press Guardian ever dealt with was the Claw.

It has been speculated that Perry Chase was a homosexual from the manner in which his father treated him as being wimpy and unintelligent, even though he continuously demonstrated a masculine appearance and a sharp intelligent mind. Also Perry, as the Press Guardian, defended men who were effeminate and weaker than the people bullying them, such as Peter La Flamme. Perry also demonstrated effeminate behavior when in private with Peter.

Retrieved from "https://heykidscomics.fandom.com/wiki/Perry_Chase_(Earth-MLJ)?oldid=1611773"
Community content is available under CC-BY-SA unless otherwise noted.