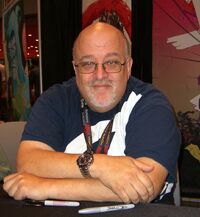 Peter Allen David (often abbreviated PAD) (born September 23, 1956) is an American writer, best known for his work in comic books and Star Trek novels. David often jokingly describes his occupation as "writer of stuff". David is noted for his prolific writing, characterized by its mingling of real world issues with humor and references to popular culture. He also uses metafiction frequently, usually to humorous effect, as in his work on the comic book Young Justice. David is Jewish, and lives in Long Island, New York.

In the early 1980s he worked for Marvel Comics in their sales department under Carol Kalish. While there, he submitted a storyline for The Spectacular Spider-Man entitled "The Death of Jean DeWolff". The story was published, illustrated by Rich Buckler, and ran in issues #107-110 of that title. The story focused on the death of the eponymous supporting character in the Spider-Man continuity and the characters' reactions to it. The story was acclaimed, both critically and popularly, and David left his sales job and became the regular writer of The Spectacular Spider-Man for a time. David credits Kalish for influencing him personally and for pushing him into a writing career, writing a moving eulogy to his former boss in "But I Digress" after her sudden death from an aneurysm in 1991.

Soon after his run on The Spectacular Spider-Man, he began a lengthy run writing The Incredible Hulk, reviving interest in the flagging title and receiving a great deal of critical praise for his efforts. Many fans consider David's work on The Hulk to be the definitive interpretation of the character. David's recurring themes of Bruce Banner's struggle to deal with the childhood abuse he suffered by his father (a theme first introduced by writer Bill Mantlo), his periodic changes between the more rageful and less intelligent Green Hulk and the more streetwise, cerebral Gray Hulk, and of being a journeyman hero (trying to find a new home after leaving The Avengers) gave The Hulk what many felt was much more emotional depth than had been seen before. The parental abuse aspect of the character's origin was again seen in the 2003 feature film adaptation by screenwriter Michael France and director Ang Lee. David’s other Marvel Comics during this time work includes runs on Wolverine, the New Universe series Merc and Justice, a run on the original X-Factor, the futuristic series Spider-Man 2099, about a man in the year 2099 who takes up the mantle of Spider-Man (the title character of which David co-created), and the 2000 and 2002 versions of Captain Marvel.

At DC Comics in 1990, David wrote a 7 issue Aquaman miniseries, The Atlantis Chronicles, about the history of Aquaman's home of Atlantis, which David has referred to as among the written works of which he is most proud. He would later write a 1996 Aquaman miniseries subtitled Time and Tide, which would lead to a relaunched monthly Aquaman series, the first 46 issues of which he would write from 1994 - 1998. His run on Aquaman gained notoriety, for in the book's second issue, Aquaman lost a hand, which was then replaced with a hooked spear, a feature of the character that endured for the duration of David's run on the book. He also wrote the Star Trek comic book for DC from 1988 - 1991, when that company held the licensing rights to the property. David's run on that title was also a fan favorite, again highlighting his use of humor, stories with strong ties to Trek's existing continuity. David also enjoyed considerable runs on Supergirl and Young Justice, the latter eventually being cancelled so that DC could use that book's characters in a relaunched Teen Titans monthly that would coincide with the debut of a new animated television series based on that team.

He also wrote a 1997 miniseries, Heroes Reborn: The Return, for Marvel Comics.

Other comics series David has worked on include his creator-owned Soulsearchers and Company, which is published by Claypool Comics, and the Epic Comics title Sachs and Violens, with art by George Pérez, which is also creator-owned. David also took over Dreadstar during its First Comics run after Jim Starlin left the title.

David and his second wife Kathleen also wrote the final English-language text for the first four volumes of the manga series Negima for Del Rey Manga.

In 2003, David began writing his newest creator-owned comic, Fallen Angel, for DC Comics. DC cancelled the title after 20 issues, but David re-started the title at IDW Publishing at the end of 2005. Other IDW work included a Spike: Old Times one-shot and the Spike vs. Dracula mini-series, both based on the character from the Buffy the Vampire Slayer and Angel television shows.

In 2005, David briefly returned to Incredible Hulk, though he left after only several issues because of his workload. He also started a new series, Friendly Neighborhood Spider-Man, beginning with a 12-part crossover storyline called "The Other", which, along with J. Michael Straczynski's run on Amazing Spider-Man, and Reginald Hudlin's run on Marvel Knights Spider-Man, depicted the webslinger as he discovered he was dying, lost an eye during a traumatic fight with Morlun, underwent a metamorphosis and emerged with new abilities, and new insights into his powers. As tends to be the case when fundamental changes are introduced to long-standing classic comics characters, the storyline caused some controversy among readers for its introduction of retractable stingers in Spider-Man's arms, and the establishment of a "totem" from which his powers are derived. David's final issue of that title was #23.

David also wrote a MadroX miniseries that year, whose success led to a relaunch of a monthly X-Factor by David. This was a revamped version of the title starring both Madrox and other members of the former X-Factor title that David had written in the early 90's, now working as investigators in a detective agency of that name.

On February 11, 2006, David announced at the WonderCon convention in California in that he had signed an exclusive contract with Marvel Comics. Fallen Angel, Soulsearchers and Company and David's Spike miniseries were "grandfathered" into the contract, so as to not be affected by it. The first new project undertaken by David after entering into the contract, which he announced on April 5, 2006, was writing the dialogue The Dark Tower: The Gunslinger Born, the comic book spinoff of Stephen King's The Dark Tower novels, which would be illustrated by Jae Lee.

It was announced at Heroes Con 2007 that David would begin writing Marvel's She-Hulk after writer Dan Slott departed the title. David's first issue was #22. The series was canceled at #38.

David has written dozens of novels, many of which have appeared on the New York Times bestseller list. His Star Trek novels are among those for which he is best known, including Q-in-Law, I, Q, Vendetta, Q-Squared, and Imzadi, one of the best-selling Star Trek novels of all time. He created the ongoing novel series, Star Trek: New Frontier, a spin-off from Star Trek: The Next Generation, with John J. Ordover in 1997. He has also written five Babylon 5 novels, three of which were originals, two of which were adaptations of the tv movies Thirdspace and Babylon 5: In the Beginning.

His other novel adaptations include those of the movies The Return of Swamp Thing, The Rocketeer, Batman Forever, Spider-Man, Spider-Man 2,Spider-Man 3, Hulk, and Fantastic Four, and the adaptation of an unused Alien Nation television script, "Body and Soul".

David has also written original fantasy works. His first novel, Howling Mad, is about a wolf that turns into a human being after being bitten by a werewolf. His novel Knight Life, about the reappearance of King Arthur in modern-day New York City, was also one of his earlier novels, and became a trilogy with the sequels One Knight Only, and Fall of Knight. His Sir Apropos of Nothing fantasy trilogy, Sir Apropos of Nothing, The Woad to Wuin and Tong Lashing, features characters and settings completely of David’s own creation, as does his 2007 fantasy novel, Darkness of the Light, which is the first in a new series of novels titled The Hidden Earth.

David has written for several television series. He wrote two scripts for Babylon 5 (the second-season stories Soul Mates and There All the Honor Lies), and one (Ruling from the Tomb) for its sequel Crusade. With actor/writer Bill Mumy, he is co-creator of the television series Space Cases, which ran for two seasons on Nickelodeon. He has also written and co-produced several films for Full Moon Entertainment and has made cameo appearances in some of the films as well.

David also had one unpublished script for the fifth season of Babylon 5 called Gut Reactions which he wrote with Bill Mumy.

On more than one occasion, editorial problems or corporate pressure to modify or re-script his plotlines have forced David to leave books, particularly his decision to leave Marvel's X-Factor, due to constantly having to constrain his plots to accommodate crossover events planned around it and other "mutant" titles (such as X-Men, X-Force, etc). When David abruptly left The Incredible Hulk due to editorial pressures, some of the plot points of the character that David established were reversed by later creative teams. While such creative-editorial conflict is a commonplace occurrence in comics, departures of creators whose books are fan favorites, as David’s often are, tend to generate more notoriety and press within the comic community.

Also as such, David's personality and high visibility in the comics profession has led to creative or personal differences with some of his comic peers, in particular several public disagreements with Spawn creator Todd McFarlane through much of the 90s as the comic book company McFarlane's co-founded, Image Comics, came into prominence. This came to a head during a public debate they participated in at Philadelphia's Comicfest convention in November 1993, which was moderated by artist George Perez. The topic of the debate was McFarlane’s claim that Image was not being treated fairly by the media, and by David’s weekly "But I Digress" column in the Comics Buyer's Guide in particular. The three judges, Maggie Thompson, editor of the Comics Buyer's Guide, William Christensen of Wizard press, and John Danovich of the magazine Hero Illustrated, voted 2-1 in favor of David, with Danovich voting the debate a tie. David has also engaged in public disagreements with The Comics Journal editor Gary Groth, Erik Larsen, John Byrne, Marvel Editor-In-Chief Joe Quesada, writer/director Kevin Smith, and DC Comics Vice President and Executive Editor Dan DiDio.

A seminal moment in David's life occurred when he met writer Stephen King at a book signing, and told him that he was an aspiring writer. King signed Peter's copy of Danse Macabre with the inscription, "Good luck with your writing career.", which David now inscribes himself onto books presented to him by fans who tell him the same thing.

In 1977, David married Myra David, whom he met at a Star Trek convention. Together they had three daughters, Shana, Guinevere and Ariel. By 1998, their marriage was over, and David was seeing Kathleen O'Shea, a puppeteer. Following David's divorce, Peter and Kathleen married on May 26, 2001. Their daughter, Caroline Helen David, was born on December 5, 2002.

David is an avid fan of bowling, and a bowler himself, as is his daughter Ariel.

Based on an outline by J. Michael Straczynski:

Based on a screenplay by J. Michael Straczynski:

Sir Apropos of Nothing

Retrieved from "https://heykidscomics.fandom.com/wiki/Peter_David?oldid=1544541"
Community content is available under CC-BY-SA unless otherwise noted.