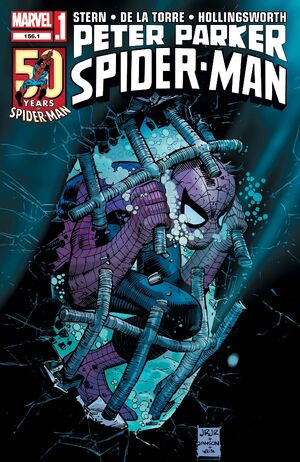 Celebrating 50 Years of the Great Responsibility of his Great powers, The Spider-Man 50th Anniversary Series collects the Webbed Wonder’s greatest heretofore secret history! Spanning from his earliest days as a hero to the heyday of the heralded Big Time era and everything in between, a collection of Marvel Legends, venerated comic creators and awe-inspiring artists shine the spotlight on everything that makes Spider-Man the World’s Greatest Superhero!

Retrieved from "https://heykidscomics.fandom.com/wiki/Peter_Parker,_Spider-Man_Vol_1_156.1?oldid=1637886"
Community content is available under CC-BY-SA unless otherwise noted.