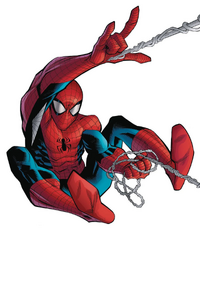 The creation of this duplicate of Spider-Man was the result of an accident involving the Isotope Genome Accelerator,[2] whose properties to transmute characteristics of one organism on to another were being reverse-engineered by Dr. Curt Connors at Empire State University with the intention to isolate and divide the hybrid properties of a living creature. When Peter Parker was paying Dr. Connors' class a visit, they were interrupted by the mercenaries Taskmaster and Black Ant. Peter tried to distract the villains,[3] and Taskmaster shoved him against the Accelerator. The device was turned on and it irradiated Peter, splitting his physical and mental attributes down the middle into two. The effects had a few seconds of delay, during which Peter caused a smoke explosion, making the process completely inconspicuous.[2]

After Spider-Man defeated the villains,[3] he took Peter away to properly analyze what occurred, and they determined that they seemingly possessed the same memories and personality, with the only major difference that Spider-Man retained Peter's spider-powers. Peter originally didn't mind Spider-Man's existence, since it allowed him to attend to his personal life while his super-powered self patrolled the city. However, the results of the separation became apparent and progressively more pronounced, and Peter discovered that Spider-Man lacked his sense of responsibility,[2] causing him to become reckless, self-conceited and brash.[1]

When the Tri-Sentinel attacked the city, Spider-Man hacked into its systems and reprogrammed it to become his own personal robot,[2] and his battles from then on cost millions of property damage. He additionally singed up for endorsement deals with numerous companies, and set up a service offering for-hire transport via webslinging. Peter eventually confronted Spider-Man about his behavior, and discovered that he couldn't remember their Uncle Ben. Shortly afterwards, Peter learned from Dr. Connors' testing with a lab rat of the fatal aftereffects that resulted from isolating the doppelgangers. In addition to the loss of learned skills and behavioral issues Peter and Spider-Man were experiencing respectively, the separation would result in their deaths.[1]

Peter tricked his roommate Boomerang into stealing the Accelerator from ESU, and took it from him in turn. Peter approached Spider-Man on a rooftop with the Accelerator charged, but he was interrupted by an invasion of Tri-Sentinels controlled by Mendel Stromm. When they were being chased by one of the robots, Peter pushed Spider-Man out of the way of one of the blasts, and was fatally injured. After realizing that not even his sacrifice could change Spider-Man's behavior, Peter used a web-shooter to yank the Accelerator from the rooftop into the street, releasing a blast of energy that merged them back together. Made whole again, Spider-Man managed to stop the Tri-Sentinel invasion.[4]

Seemingly that of Peter Parker.

Web-Swinging: Spider-Man uses his web-shooters to travel by swinging on web-lines. Combined with his spider abilities, he can move at amazing speeds throughout the urban chasms of Manhattan. Spider-Man was able to keep pace with Captain Marvel at his best speed, surprising the Kree warrior, although Spidey mentioned it was mostly due to his practice with web swinging over his career.[5]

Retrieved from "https://heykidscomics.fandom.com/wiki/Peter_Parker_(Isotope_Genome_Accelerator_Duplicate)_(Earth-616)?oldid=1631987"
Community content is available under CC-BY-SA unless otherwise noted.