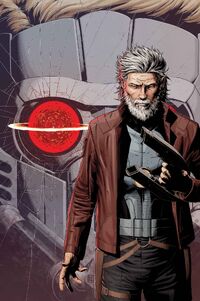 Sometime before the Red Skull overthrew the United States of America, Star-Lord stepped up to be the Emperor of the Spartoi, while marrying L'ssa who bore him two children, Meredith and Jason.

Due to his duties he could not assist the Guardians on an unspecified mission that resulted in Groot's death, leaving his relationship with the others strained.

He continued being the emperor for fifty years after the uprising and remained oblivious to the events on Earth, until the Universal Church of Truth attacked his planet, killing his family in the process.

Quill then rejoined the Guardians on a mission to investigate a distress call in the Sol System, and after finding the Peak overrun with Brood, ultimately crash landed in the Badlands of Amerika.[1]

Retrieved from "https://heykidscomics.fandom.com/wiki/Peter_Quill_(Earth-807128)?oldid=1671453"
Community content is available under CC-BY-SA unless otherwise noted.