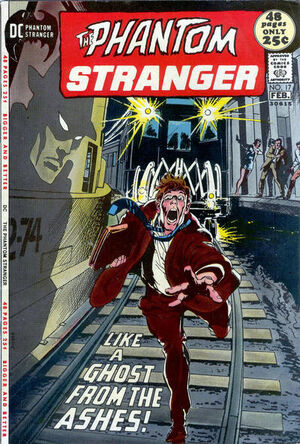 What is the measure of a man? Is it confidence and grim determination or is it fear-- and the ability to overcome that gnawing terror in the face of adversity?

Coming to the rescue of a man being pursued by thugs to recollect stolen scrolls, the Phantom Stranger decides to defend the man. However, when the thugs come at him, the Stranger is suddenly weakened by magical forces and beaten by the thugs who take what they want before leaving. The Stranger is rescued and taken in by Cassandra Craft, a blind girl who has an affinity for the occult.

Because he is still weak, the Stranger cannot convince Cassandra from joining him to Saudi Arabia. There the two are drawn to an archeological dig that is taking place there. After busting up some would be thieves, the Phantom Stranger and Cassandra are knocked out by the archeologist who is digging the site.

When they are revived, they find themselves mystically bonded, and the archeologist changes shape into Tannarak, who has survived his last encounter and is seeking to resurrect the ancient Phoenix. The Phantom Stranger tries to break himself loose, the Phantom Stranger battles Tannarak and the Phoenix. However the Phoenix learns of Tannarak's use of for the creature and it sacrifices itself to stop him, seemingly killing them both.

When the dust settles, the Phantom Stranger leaves Cassandra Craft, telling her that wherever he travels he does so alone.

This story is reprinted from Star Spangled Comics #124

Appearing in "I Was a Victim of Black Magic"Edit

Synopsis for "I Was a Victim of Black Magic"Edit

This story is reprinted from House of Mystery #3

Retrieved from "https://heykidscomics.fandom.com/wiki/Phantom_Stranger_Vol_2_17?oldid=1445467"
Community content is available under CC-BY-SA unless otherwise noted.