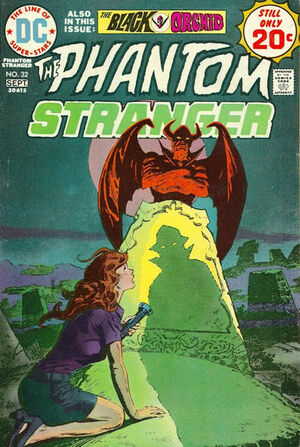 Appearing in "It Takes a Witch!..."Edit

Synopsis for "It Takes a Witch!..."Edit

When a local town is rife with anti-witch hysteria, the local witch Mrs. Haggarty is blamed for various twisted rituals. Things swell to the point in which the mayor, Miles Lanyard III demands that all books on witchcraft and all items pertaining to witchcraft be burnt.

When people try to hurt Mrs. Haggarty she is protected by the Phantom Stranger, and later when she is knocked out and her house set ablaze, the Stranger rescues her. When Lanyard's girlfriend Carol James learns that Lanyard is really the original Lanyard the first, who has managed to survive all these years. Mrs. Haggarty tells all present, that all her witchcraft artifacts were saved by the Stranger except for one: The Devil's Candle, which was in the shape of Lanyard. When the flames reach it and it melts, Lanyards body also melts into a pile of goo.

Appearing in "The Crime of the Black Orchid"Edit

Synopsis for "The Crime of the Black Orchid"Edit

The female superhero The Black Orchid appears to be using her abilities for criminal activities.

Retrieved from "https://heykidscomics.fandom.com/wiki/Phantom_Stranger_Vol_2_32?oldid=1445482"
Community content is available under CC-BY-SA unless otherwise noted.